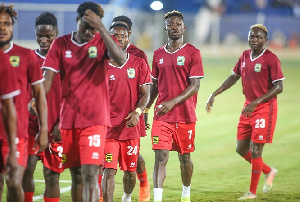 Asante Kotoko coach Seydou Zerbo has named his starting eleven for their clash against Nsoatreman FC on Wednesday.

The Porcupine Warriors host the Ghana Premier League newcomers in an outstanding fixture at the Baba Yara Stadium.

Ahead of the tie, the Burkinabe trainer has named the same starting eleven that played a 1-1 draw against Hearts of Oak last Sunday.

Below is the starting 11: