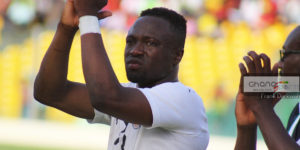 Ghana international Bernard Tekpetey has reiterated his desire to return to the national team as the 2021 Africa Cup of Nations tournament and the FIFA World Cup qualifiers draws nearer.

Tekpetey has been out of the Black Stars squad for sometime now and according to him, he is doing all that he can in order to return to the team.

In his first season at Ludogorets, the enterprising Ghanaian forward has helped his outfit to clinch the Bulgarian league title with four games to spare.

Tekpetey has played 31 times in all competitions, scoring 1 goal and adding 8 assists to his credit.

Asked if he would love a return to the Black Stars after the league success with his team, he said, “Of course since I have played for the national team already I will not be surprise. I am trying to do my best with my club and ones the scouting and coaching team are there if they monitor me and realized my performance is good and invited I will be really glad about it to come and represent the nation ones again”

“So it is all about prayers and hard work and that is what I am doing over here and so if they realized I am do well and invited I will be really happy to be back again into the national team” he told Kumasi based Wontumi FM.

Tekpetey made his Ghana debut against Egypt during the 2017 AFCON tournament and has capped twice since then without a goal.