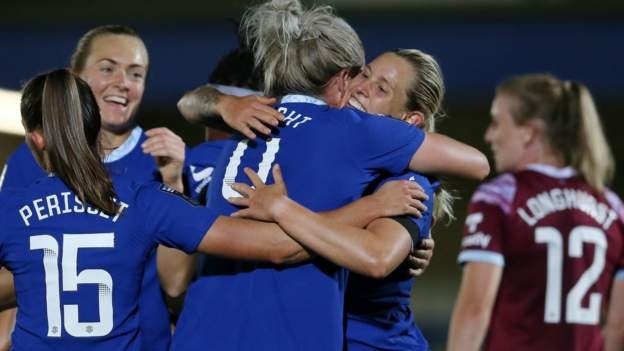 Chelsea recovered from an early setback to beat West Ham in the Women's Super League at Kingsmeadow.

West Ham captain Dagny Brynjarsdottir was left unmarked as she headed the visitors in front after two minutes.

Defending champions Chelsea responded when Fran Kirby scooped in an equaliser before half-time.

Striker Sam Kerr, who hit the post twice, eventually scored Chelsea's second, before Millie Bright's header made it 3-1 to the hosts.

Chelsea dominated the second half and should have scored more as substitute Lauren James won a penalty but could not beat goalkeeper Mackenzie Arnold from the spot.

Watched by brother and fellow England international Reece James, Lauren was impressive again in a short appearance from the bench.

Kerr, meanwhile, had a frustrating evening, but she caused plenty of problems for the West Ham defence.

Lucy Parker, who earned her first England call-up on Tuesday, did well to keep her at bay for large periods but Kerr's quality was evident when she twice struck powerfully against the post.

The Australia international eventually got her first goal of the season when West Ham failed to clear the ball in the box and it dropped kindly for Kerr to poke in from close range.

Chelsea midfielder Guro Reiten had also came close, while Bright sent a header wide before netting the final goal in what ended up being a comfortable victory for the Blues.

Attempt missed. Lauren James (Chelsea Women) right footed shot from the right side of the box is close, but misses to the right. Assisted by Jelena Cankovic following a corner.

Attempt missed. Bethany England (Chelsea Women) header from the centre of the box is close, but misses to the right. Assisted by Jelena Cankovic with a cross following a corner.

Lauren James (Chelsea Women) wins a free kick in the defensive half.

Johanna Rytting Kaneryd (Chelsea Women) wins a free kick in the defensive half.

Attempt missed. Bethany England (Chelsea Women) header from the left side of the six yard box is close, but misses to the right. Assisted by Jelena Cankovic.

Attempt saved. Niamh Charles (Chelsea Women) right footed shot from the left side of the box is saved in the centre of the goal. Assisted by Bethany England.