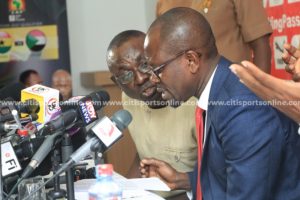 Akonnor has come under pressure after he named his final 29-man squad for the 2021 Africa Cup of Nations qualifiers against South Africa and São Tomé this month last week.

The technical handlers of the team were taken to the cleaners by some Ghanaian football fans following the inclusion of Kwame Afriyie Poku of English 4th tier side, Colchester United.

But according to Paintsil, Akonnor knows his job and must be allowed to work devoid of interference.

“It is the coach who knows what will help his team and the nation.

“At the end of the day, when the criticisms come, they will be placed at his doorstep.

“So the coach has to make the right decisions that will help him build his CV.

“Every coach wants to build his CV.

“No coach wants to lose games.

“I think the supporters should have the patience for the coaches.

“Most of the coaches who once handled Ghana came with their systems and nothing would change their mindset.

“So we must endeavour to learn the game of football.” John Paintsil said.

Kwame Afriyie Poku’s name has since been taken out of the Black Stars squad for the two qualifying games.

Ghana will travel to South Africa as guest of the Bafana Bafana on March 25 in the penultimate Group C qualifiers at the FNB Stadium.

They will then return home against São Tomé on March 29 for the final game at the Accra Sports Stadium.

The Black Stars need just a point to qualify for the 2021 Africa Cup of Nations to be staged in Cameroon.

Ghana are joint on 9 points with South Africa at the top of Group C with Sudan in 3rd on 6 points and São Tomé bottom with no points after four matches.