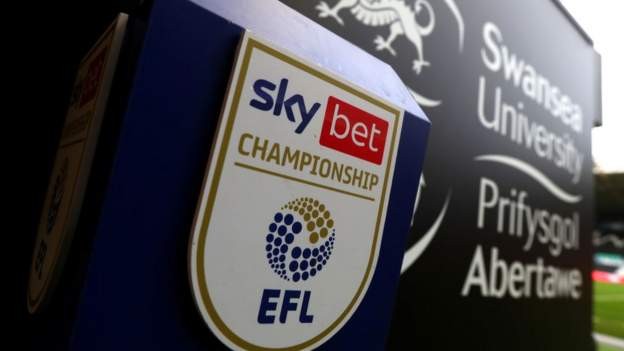 The English Football League is divided into the Championship, League One and League Two

English Football League clubs are still receiving a direct cut of gamblers' losses as part of a now discontinued scheme with their betting partner.

Since 2013, clubs have received a share of those losses if a customer signed up to Sky Bet via the club's website.

The EFL says the deal was phased out during the 2019-20 season to focus more on safer gambling.

But clubs are still receiving money from customer losses as a legacy of the agreement.

That part will continue until at least 2023-24 when Sky Bet's contract expires, but the EFL said "all sign-up links via EFL Digital channels have been removed".

The document showed Accrington did not receive any income from the affiliate scheme, referenced in the contract as 'the EFL digital share of losses', even though the EFL has a multi-million-pound deal with the gambling firm.

"I wasn't aware there was (or is) a deal with betting companies," Holt said. "Our income is nil and I would not let our staff encourage gambling.

"But once again, regardless of opinion on betting, this highlights the institutional bias on the part of the EFL in favour of big clubs."

The Sports Desk podcast: Is it time for football to cut ties with gambling?EFL clubs to discuss cost of living crisis on Thursday

Campaign group The Big Step described the affiliate scheme, where companies encourage gamblers to bet with a particular firm for a percentage of losses, as "unacceptable".

An EFL spokesperson said: "When the EFL and Sky Bet renewed its long-standing partnership for the 2019-20 season, we placed a greater focus on putting safer gambling at the heart of the agreement. As a result, the previous affiliate scheme was discontinued.

"While some clubs do receive revenue from legacy sign-ups that occurred prior to the new agreement, the affiliate scheme in place was phased out and all sign-up links via EFL Digital channels have been removed."

The EFL did not disclose how many clubs previously benefited from the deal or which clubs still received money from it.

The Big Step founder James Grimes said: "It's unacceptable that through an unhealthy league sponsorship deal, every EFL club is forced to expose their fans to addictive gambling products in the first place, let alone take a cut of their losses.

"Many of these fans will experience devastating suffering and some will die. That clubs directly profited from inevitable harm is a game changer in the fight to end gambling sponsorship in football. No one should accept that this is normal or safe."