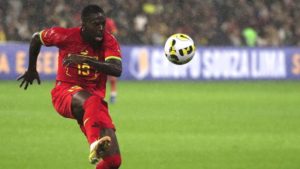 Former Black Stars player, Laryea Kingston says he saw positives in the performance of striker Inaki Williams during Ghana’s friendly matches in the past week.

Particularly in Tuesday’s match against Nicaragua, the retired midfielder who is now a coach says the Athletic Bilbao forward did very well to help his teammates.

“For me what Inaki [Williams] did in the game was very positive.

“I know most of the players that he played with, they are not used to him.

“He made a lot of positive runs, very good runs that created a lot of spaces for Kudus Mohammed, Fatawu Issahaku and Osman Bukari around the box,” Laryea Kingston told Radio Gold Talk Sport in an interview.

The former Black Stars man continued, “Sometimes you encourage strikers to make runs to deceive the opponents, just to stretch the opponents across the pitch.

“So it’s not necessary that if you make a run, you will get the ball.

“I’m sure Inaki Williams where he has played football up to, he understands all these dynamics in the game.”