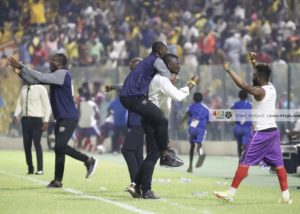 Former Hearts of Oak deputy coach Hamza Obeng has bid an emotional farewell to the club after he was relieved off his duty on Tuesday.

The Phobians are without a win three games into the season – lost once and drawn twice with the latest being the 1-1 stalemate against Asante Kotoko at the Baba Yara Stadium on Sunday.

Hearts are of the opinion that there is the need for a new direction and the energy to ensure its broader objectives are achieved and it feels the time for that new direction.

"It has been a good period serving the Phobia Family. Thanks for all your support and encouragement during my time with you. Wish the club all the best in the current season and subsequent ones," Hamza Obeng posted on his twitter page.

Obeng, together with Samuel Boadu led the Accra-based side to their first league title two seasons ago. He also won back-to-back MTN FA Cups, Super Cup and the 2021 President’s Cup during his time at the club.