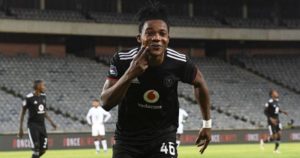 Ghanaian forward Kwame Peprah is reportedly close to leaving Orlando Pirates after just one season due to lack of playing time ahead of the 2022 FIFA World Cup.

The 21-year-old, who joined Pirates from Ghana Premier League club King Faisal ahead of the start of the 2021/22 season scored nine goals last term for the Buccaneers - seven in the league, two in the CAF Confederation Cup.

Despite an impressive debut campaign, he has found himself slipping down the pecking order.

This season, Peprah has featured in only four matches for the Sea Robbers and is yet to find the back of the net.

With Gabadinho Mhango sold to AmaZulu and Tshegofatso Mabasa loaned out to Sekhukhune United, many would have expected Peprah to be leading the line for Pirates this season.

Instead though, the Sea Robbers have gone out and signed forwards Bienevu Eva Nga and Kermit Erasmus.

Now to add salt to Peprah's wounds, the Soweto side are reportedly set to acquire the services of another over-30 striker to their ranks in ex-Bucs forward Ndumiso Mabena.

He won a silver medal after RS Berkane defeated Orlando Pirates in the final of the CAF Confederation Cup which was held in Oyo, Nigeria.