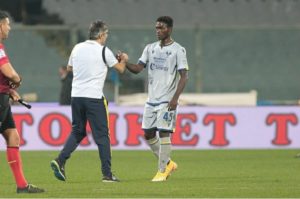 Philip Yeboah made his first appearance in Serie A for Hellas Verona's in last Saturday's encounter against Fiorentina.

The 18-year-old recently joined the first team from the U19 side, after the Italian Football Federation (FIGC), suspended all Juvenile leagues across the country due to the disturbing rise in Covid 19 cases.

Yeboah shared his excitement after playing his first Serie A match for Hellas Verona.

"I'm very excited for my debut. For the first time, I finally made the bench of the first team. I was really anxious."

After making it to the bench, Yeboah was hopeful despite no sign of a possible debut from Hellas manager Ivan Juric

"I didn't expect the coach to let me play the game .. but I hoped until the end. "

The teenage old forward was introduced in the 78th minute for midfielder Matia Zacchi with the score at 1-1 as Verona searched for the winner.

"I think I did a good performance, I believe I can always do better."

In the end, coach Juric was impressed with his desire  and aggression in the opponents area.

"The coach told me that for being the first time on the football field, I made a good performance. Going forward, I expect to always give my best!"