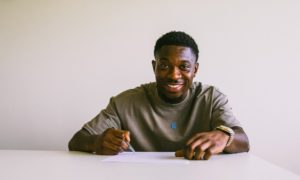 Ghanaian forward Francis Amuzu has expressed his delight after penning a new contract with Anderlecht that runs to 2025.

Amuzu enjoyed a good season last year, scoring 10 goals and providing five assists, including a hat-trick against Antwerp in the play-offs.

"I can truly feel that both the club and the coach are counting on me. I am very happy with the trust they place in me. It makes me proud to be able to renew my contract here."

"I hope I can give back even more to the fans", Francis Amuzu said as quoted by the club's official website.

This season, he has been one of consistent performers in Felice Mazzù’s starting eleven.

Despite the interest of several clubs in Europe, Amuzu has opted to renew his contract with his childhood club.

He has made 14 appearances this term for Anderlecht, scored two goals and provided two assists in the process.

Amuzu made his professional debut for Anderlecht in a 1-0 Belgian First Division A win over K.A.S. Eupen on 22nd December 2017, scoring his side's game-winning goal.