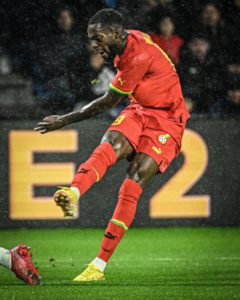 Former Ghana star, Laryea Kingston says he will not be surprised if Inaki Williams is the main Black Stars striker at the 2022 FIFA World Cup.

According to him, the player has shown he has the quality and is likely to get the nod over other players, especially with the experience he has.

Speaking to Radio Gold Talk Sport, Laryea Kingston said, “I see him [Inaki Williams] as someone that is going to lead our striking position in the tournament because of the experience and all I have seen about him as a technical person.”

The retired footballer who is now a coach added that he was impressed with the performance of Inaki Williams in the two friendly matches played in the past week against Brazil and Nicaragua.

“Inaki Williams did not get enough balls but he did the right thing against Nicaragua,” Laryea Kingston said.

Inaki Williams will have another chance to show what he can do in November when Ghana takes on Switzerland in a final pre-world cup friendly match.