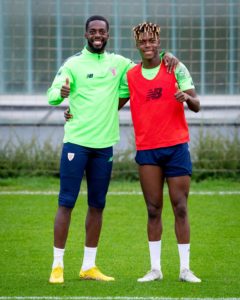 Ghana international, Inaki Williams is already back with his teammates at Athletic Bilbao to prepare for the next match in the Spanish La Liga.

The highly-rated forward received his debut call-up to play for the Black Stars earlier this month.

Last Friday, the attacker was a second-half substitute when Ghana faced off with Brazil in a pre-world cup friendly match.

Before he was introduced into the game, the Black Stars had conceded 3 goals in the first half, a scoreline that stayed unchanged until the end of the game.

Subsequently, Inaki Williams on Tuesday featured for Ghana when he started the game against Nicaragua in Spain.

In that friendly, the Spain-based attacker put up another good performance and helped the Black Stars to record a narrow 1-0 win.

Today, Inaki Williams has returned to Athletic Bilbao where he is already training with his teammates to prepare for the next game in the Spanish La Liga against Almeria.