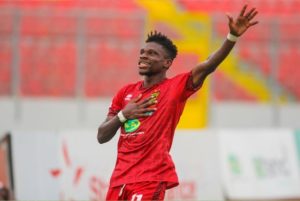 Late last month, Italian Serie A club Udinese opened talks for the signing of the player after being impressed with his fantastic performance from the previous season.

During the talks, reports suggest that although the Ghana Premier League side played ball, they were also open to allowing the striker to leave for good money.

Today, the latest news on the transfer market indicates that Swiss Super League side FC Sion have also entered the race.

From the information gathered from Cameroon, the club has tabled an offer before Asante Kotoko in a bid to try and persuade the club to allow Franck Mbella Etouga to join the club.

From sources, the offer is now being studied for the club to take a decision.

Last season, the goal poacher netted 21 goals in the Ghana Premier League and led Asante Kotoko to emerge as champions of the division.

His stock has since shot up with clubs in Europe chasing after his signature in a bid to bolster their squad.