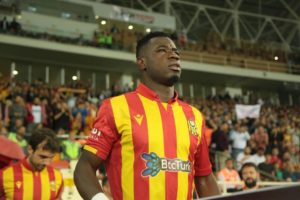 Yeni Malatyaspor midfielder Afriyie Acquah says he is yet to speak Black Stars coach Charles Kwablan Akonnor since he took charge of the team earlier this year, but he is confident of retuning to the team.

The 29-year-old, last played for the senior national team at the 2019 Africa Cup of Nations held in Egypt.

Acquah recently was not handed a call-up by coach CK Akonnor to feature in the friendlies against Mali and Qatar this month.

"I always say the national team is not for one person, there are many Ghanaian players but this is not like club football, so a coach needs a group of people who will play together for a long time so they get to each other," Acquah said on Max FM's Sports Pack 1.

He added, "Of course, everyone watches football, I am doing well, anyone who knows me knows what I can do, ever since the season started, I play week in week out."

Acquah has made 36 appearances and scored one goal for Ghana.