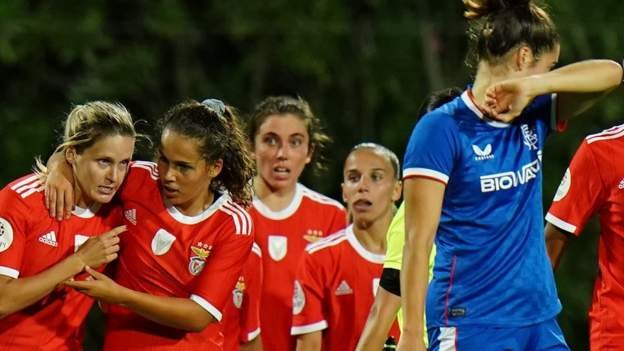 Rangers threatened a shock result away to Benfica before missing out on qualifying for the Champions League group stage for the first time.

A close-range finish from 16-year-old Emma Watson took the tie into extra time at 3-3 on aggregate.

But a solo goal from Canada striker Cloe Lacasse and a late breakaway finish from Jessica Silva gave the Portuguese what was a deserved win.

Even defender Lucia Alves' late sending off could not deny the hosts.

Goalkeeper Victoria Esson, whose first-leg own-goal fumble handed Benfica their first-leg advantage, had this time denied the Portuguese champions a more convincing victory as they reached the group stage for a second successive season with a 10th straight win.

Reaction & as it happened

Both sides had returned to more familiar lines after recording convincing domestic wins despite making sweeping changes to their weekend line-ups.

But including Brazilian forwards Nycole Raysa and Valeria in place of defender Daniela Ferreira Silva and striker Marta Cintra looked like a move of attacking intent by host head coach Filipa Patao.

There was certainly little need for cover in defence throughout the first half as Benfica toyed with the visitors.

After Ana Vitoria, who had been moved back into the home midfield despite scoring twice in the first leg, forced a near post save off the Esson's knees, it signalled a wave of attacks that had the visitors pinned back in their own half.

Esson, making up for that first-leg error, was twice at full stretch to deny midfielder Andreia Faria from long range and then saved bravely at the feet of Raysa.

Defender Ana Seica fluffed her lines in front of an open goal and Lacasse fired against the crossbar.

The one-way traffic continued after the break, but Benfica's efforts on goal were becoming increasingly less accurate and Rangers began to inch their way back into the game.

It took Malky Thomson's side until the 76th-minute to threaten and, when they did, substitute Watson fired straight at goalkeeper Rute Costa, while fellow midfielder Chelsea Cornet shot wide moments later.

However, when Costa failed to hold a corner under pressure, Watson stabbed the loose ball home to level the aggregate score.

A Nicola Docherty drive skimmed the crossbar as Rangers came close to a shock win in normal time, but the full-back was shown a clean pair of heels three minutes into extra time as Lacasse strode into the penalty box to fire past the exposed Esson.

Alves' sending off gave Rangers the late numerical advantage, but Benfica still managed to end the game the dominant side as substitute striker Silva raced clear to end the visitors' Champions League dream.